Quantum solids engender a remarkable variety of quantum electronic phases otherwise unimaginable in conventional electronic materials like silicon. A prominent example is that of high-temperature superconductors (HTS), which could pave the way to groundbreaking technologies – more powerful and compact MRIs, lossless energy transport, or widespread quantum computation – but are otherwise hard to manufacture in the forms known to date. In this project, we aim to discover new HTS materials with critical temperature above 30 K and a simpler, more malleable structure. To this end, we will synthesize and investigate transition metal tellurides, a new promising family of quantum solids with robust ordering of the electrons. The latter becomes relevant in light of recent theoretical advancements suggesting that superconductivity emerges in proximity to other electronic orders. We will develop and apply new recipes to suppress these competing phases and enhance superconductivity. The end goal is to establish new materials platform supporting high-temperature superconductivity.

In this project, we synthesized new transition metal compounds with the potential to host unconventional superconductivity arising from strong electronic (Coulomb) interaction.  In strongly-interacting electron fluids, competing electronic instabilities can arise that may lead to the pairing of electrons and holes (charge-density-waves) or of electrons and electrons (superconductivity).  These two phenomena are widespread in transition metal-based materials.  The formation of these unique forms of electronic pairs and their condensation into a collective many-body quantum state is controlled by materials-specific microscopic parameters, but often these two tendencies can coexist in the same system.  This project is guided by the intuition that systems exhibiting one form of instability (charge-density-waves) can serve as a platform to engineer the other one (superconductivity).  To find a new material with these emergent properties, we drew inspiration from systems where superconductivity surfaces from an otherwise robust charge-density-wave ground state, albeit at low temperature.

Within the first year of this campaign, we have successfully synthesized the compound TaTe4, which serves as the parent phase with a charge-density-wave ground state from which superconductivity was proposed to arise upon suitable alterations to the materials’ characteristics. Because a charge-density-wave is often a highly energetically stable phase of matter, we have strived to find an appropriate pathway to weaken this phase and set the stage for the emergence of competing orders.  Ultimately, we have established a synthesis protocol to carefully introduce dilute impurities in these compounds and suppress the charge-density-wave ground state.  We are now in the process of examining the electronic properties of these doped materials, and their relation to the parent phase. 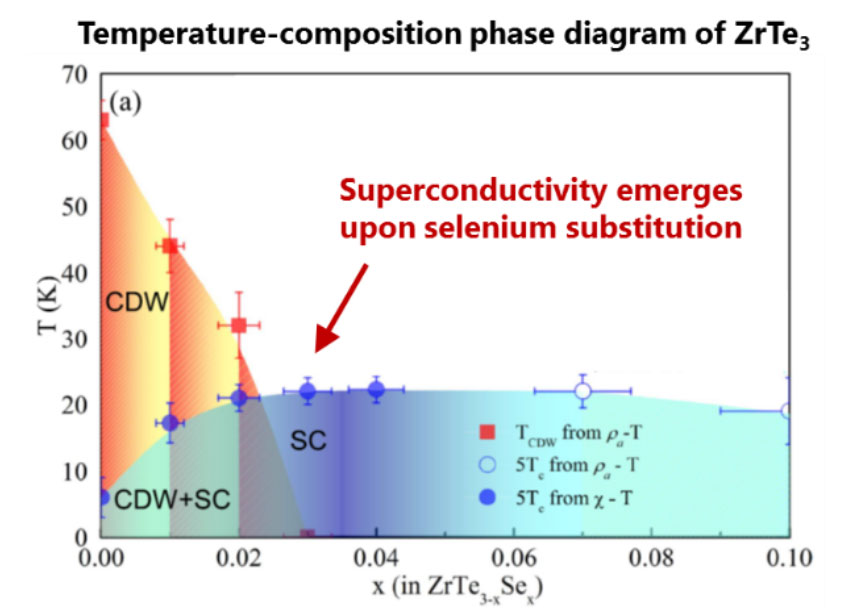 Figure 1. Phase diagram of ZrTe3 vs. selenium concentration (x), showing a complete quantum melting of the charge-density-wave (CDW) state at a critical composition of 0.3 [1].  Superconductivity is enhanced because of CDW suppression.

The main compound of interest is tantalum telluride (TaTe4), which possesses a quasi-1D structure and was previously found to harbor a charge-density-wave (CDW) phase. The end goal of the project was to synthesize high-quality, macroscopic single-crystal samples of TaTe4, and study the electronic properties in the parent phase and as a function of doping or chemical substitution.  TaTe4 has a robust CDW ground state surviving up to very high temperatures (475 Kelvin), which we sought to disrupt using appropriate dopants (e.g., Se), in the quest for superconductivity at potentially high temperatures. A similar approach was used in the sibling compound ZrTe3, also using selenium substitution. Figure 1.

We examined these systems starting from scratch (synthesis) and moving on to more advanced studies of the structural and electronic properties using various techniques and probes (X-ray diffraction, Raman scattering, Angle-resolved Photoemission Spectroscopy).

The primary synthesis technique adopted in this project is Chemical Vapor Transport (CVT). This term summarizes a variety of reactions that show one common feature: a condensed phase, typically a solid, is volatilized in the presence of a gaseous reactant (or transport agent), and deposits elsewhere, usually in the form of single crystals.  The reaction leads to the formation of different materials if the chemical equilibrium constants at the site of volatilizing substance (or source) are different than at the site of crystallization (or sink). In a lab setup, typically this is realized by loading the chemicals (or precursors) into a quartz tube which is later sealed in vacuum. The sealed tube is then placed into a heater which creates a temperature gradient across its length. Figure 2.

After optimizing the process to obtain pure TaTe4 crystals (months 1-3), we succeeded to grow Se-doped crystals using a special procedure that requires directly diffusing Se vapour into TaTe4 crystals.  The crucial trick and new information we learned on the growth of TaTe4-xSex is that these mixed phases are not stable at the usually high temperatures of CVT.  Instead, by diffusing Se vapor into TaTe4 at a moderate temperature of 220 C for 24-48 hours, we managed to dope Se into TaTe4 homogeneously.  At the end of this process, we had established CVT protocols to synthesize high-quality crystals of pure and doped TaTe4 with high reproducibility (see Figure 2 for an image of an mm-sized representative crystal).

X-ray diffraction measurements were performed on pristine crystals of stoichiometric and Se-substituted TaTe4. Figure 3A shows the comparison between the X-ray powder diffraction scans for pure TaTe4 and Ta(Te,Se)4 (Se concentration ~ 5%).  The similarity of the diffraction profiles is a direct demonstration that Se-doped crystals retain the structure of the pristine phase, rather than crystallizing into a different lattice structure.  This result represents an important milestone in exploring the electronic phase diagram of tantalum telluride without disrupting its internal atomic structure.

Figure 3. A, X-ray powder diffraction scans, plotted as X-ray counts vs diffraction angle. The excellent match between the diffraction peaks of pristine (black) and doped TaTe4 (red) is direct proof that doping was achieved without altering the lattice structure of TaTe4. B, Raman spectra of the same pristine (black) and doped TaTe4 (red).  The different profile and Raman peaks in the two crystals reflect a different symmetry in the two compounds, which we tentatively attribute to the disappearance of the charge-density-wave phase in doped TaTe4.

Raman Spectroscopy was also used to observe a change in symmetry between the pure and doped compounds.  This observation may indicate an erasure of charge-density-wave order in Se-doped TaTe4.  This finding confirms that Se substitution is effective in weakening or even suppressing the CDW phase in this material, in analogy to similar chalcogenide compounds. 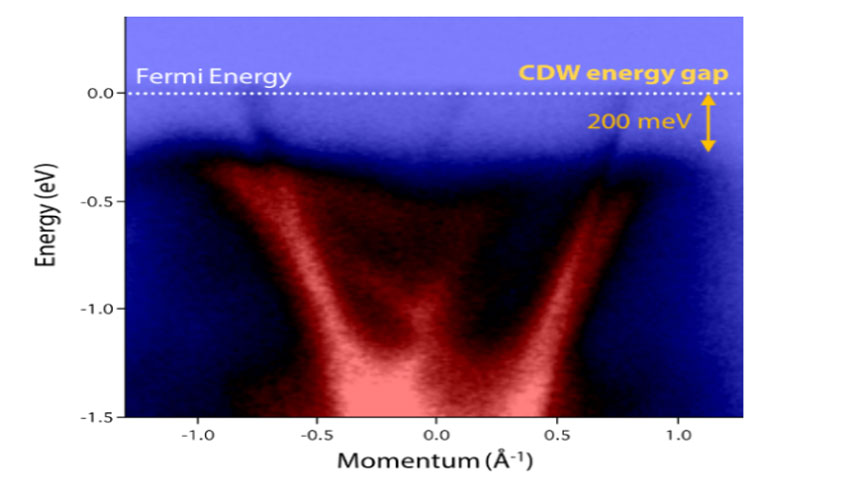 Figure 4. Electronic bandstructure of TaTe4, as a function of electron momentum and energy. An ostensible energy gap has opened below the Fermi energy, pushing the bulk bands down by an energy scale of 200 meV, which points to a very large condensation energy for the charge-density-wave ground state in this material.

Angle-resolved Photoemission Spectroscopy measurements were made on single crystals of TaTe4, in order to visualize the electronic band levels in this material.  We performed these experiments at beamline ESM of the National Synchrotron Light Source II at Brookhaven National Laboratory (Upton, NY).  A snapshot of the bandstructure in TaTe4 is shown in Figure 4: here, the presence of sharp and intense energy bands is a first testament to the high quality of the crystals. Most importantly, we have found an unexpected energy gap in the band structure, which likely represents the energy scale for the formation of the charge-density-wave state of this material. Remarkably, the energy scale of this gap is around 200 meV, or ~ 2000 K when translated to an equivalent temperature (, where  is Boltzmann’s constant).

This finding confirms our original intutition that charge-density-wave order in this system is stabilized by a very significant energy scale as a result of strong interactions and the low dimensionality of the material.

During the period of research supported by the MIT-Skoltech seed grant, we have met several scientific objectives outlined in the original plan.  The synthesis of TaTe4 and the development of a suitable doping protocol to selectively suppress the charge-density-wave phase without disrupting the atomic structure of the material have both been successful, despite requiring the development of special recipes.  Starting from the groundwork of this preliminary phase, we will move to explore the eelctronic phase diagram of this material and search for superconductivity as a function of temperature and doping.  The latter, it is worth noting, has been recently achieved through high pressure in TaTe4 and chemical substitution in sister compound TaTe2, showing the superconductivity is indeed a stable electronic phase of this system under suitable conditions.3,4  The scientific output of this second phase of research will further enable us to consolidate and strengthen our collaboration with groups and partners at Skoltech.

During the period April-May 2018, we hosted Skoltech M.Sc. student Alexander Korenkov for a period of six weeks at MIT, to participate to research activities related to this project, and to receive training on a variety of experimental techniques of broad interest for Skoltech research and educational program.  Alexander was trained on a variety of growth techniques, which he successfully used to explore new approaches to dope the material of interest (TaTe4), and on several characterization instruments, including electron microscopy, magnetometry, X-ray diffraction, and X-ray fluorescence. Further, Alexander was trained on the use of spectroscopic probes of electronic materials, particularly Raman spectroscopy which is highly sensitive to both charge-density-waves and superconductivity.
During the past year, the PI has also interacted with Prof. Boris Fine from Skoltech, to explore potential collaborations on the theoretical understanding of these new materials and their electronic phenomena.
In October 2017, the PI participated to a symposium in Moscow, jointly organized by MIT and Skoltech, with a focus on “Perspectives on high-temperature superconductivity”.